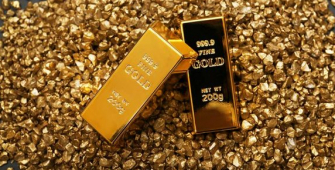 Gold prices increased on Friday as investors fled to safe-haven assets after U.S. President Donald Trump re-ignited trade war fears by proposing $100 billion in new tariffs on China. Spot gold climbed 0.3 percent to $1,330.18 per ounce. U.S. gold futures were 0.4 percent higher at $1,333.50 an ounce. The precious metal was up 0.5 percent so far this week. Gold on Thursday fell to a one-week low of $1,322.40 an ounce after the United States and China signalled a willingness to negotiate their trade dispute. Holdings of the SPDR Gold Trust, the world's largest gold-backed exchange-traded fund, increased 0.24 percent to 854.09 tonnes on Thursday. The holdings of North American gold-backed exchange traded funds rose by 21.5 tonnes, worth $916.9 million, in March, a 1.7 percent increase from the previous month, according to the World Gold Council. In other precious metals, spot silver rose 0.2 percent to $16.38 an ounce. Platinum added 0.1 percent to $911 an ounce, while palladium was steady at $905.40 an ounce.