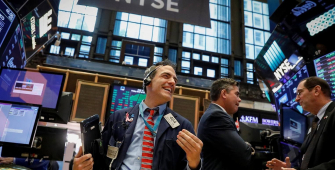 U.S. stocks rose on Thursday as tech shares advanced while investors brushed off fears of an escalating trade conflict between the United States and China and looked forward to the quarterly earnings season. The Dow Jones industrial average rose 240.92 points to 24,505.22, with Boeing and DowDuPont as the best-performing stocks. Boeing, among the worst hit stocks on Wednesday after China retaliated with $50 billion in tariffs on U.S. goods, rose 2.4 percent, pulling up the Dow. The S&P 500 gained 0.7 percent to close at 2,662.84, with materials leading 10 sectors higher. The Nasdaq composite advanced 0.5 percent to 7,076.55. Tech helped lead the move higher, with Facebook bouncing 2.7 percent and gains of over 1.5 percent in Netflix and Amazon. Facebook's move came after CEO Mark Zuckerberg told reporters he has not seen a noticeable change in user behavior in the wake of the Cambridge Analytica data scandal. Facebook, Amazon, Alphabet and Netflix - collectively known as the “FANG” group - were up between 1 percent and 3 percent. Chipmaker Advanced Micro Devices also climbed 2.6 percent after Stifel upgraded them to a buy from hold. The S&P and the Dow were on track to post their first three-day gains in about a month. Ten of the 11 major S&P sectors were higher, led by a 2,2 percent rise in the S&P energy index as oil prices rose. Wall Street's fear gauge, the CBOE Volatility index eased to a two-week low at 19.21 points.